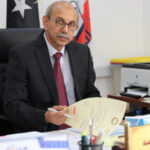 Salim Bin Tahia told the press on Saturday that municipal elections were held regularly until Dbeibeh came into power.

He explained that holding these elections is “among the core competencies and responsibilities of the government in accordance with Law 59 of 2012.”

Tahia questioned the sincerity of Dbeibeh’s plan to hold parliamentary elections in June giving its failure to organize municipal elections.