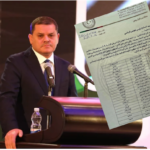 The government of Abdul Hamid Dbeibeh has increased the economic suffering by spending 300 billion dinars (roughly 61 billion dollars) on matters that have nothing to do with the Libyan citizen,” member of the House of Representatives, Ibrahim al-Dresi, confirmed, adding that “the time has come for its departure.”

Dresi said, in a press statement, that “Dbeibeh’s intervention prevented the meeting of Aguila Saleh and Khalid Al-Mashri,” adding, “Because we all know that the agreement of the House of Representatives and the State Council implicitly means the end of the Dbeibeh government.”