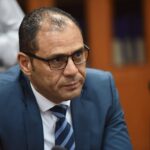 Elections must be held on time to avoid new war, warns former minister

Former Education Minister Othman Abdel Jalil told the press on Saturday that he rejects the proposal of dividing the upcoming presidential and parliamentary elections into two phases, calling for holding both simultaneously.

“There is a need to officially issue the presidential election law, and to issue the constitutional basis to get out of the political impasse,” said the minister who served in the cabinet of former Prime Minister Fayez al-Sarraj.

“In the event that elections are not held, there will be several scenarios, the most important of which is entering into another transitional phase, and entering into a new war,” he warned.