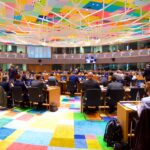 The European Union’s Foreign Affairs Council will convene a meeting today in Brussels, where the European foreign ministers will discuss a number of issues including the situation in Libya, announced Germany’s foreign ministry.

German Foreign Minister Annalena Baerbock will attend the meeting in which she will discuss with her European counterparts the EU’s support for the democratic process in Libya.

“Germany welcomes the United Nations’ work in Libya. The UN is advocating a Libyan-led and Libyan-owned political process that will lead to the holding of free, fair and inclusive elections,” reads the statement of the Germany ministry.