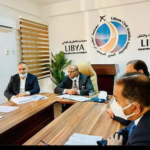 Undersecretary of the Libyan Foreign Ministry, Omar Katti, discussed on Wednesday mechanisms of lifting ban on Libyan civil aviation imposed by the European Union, during a meeting with the Civil Aviation Authority in Tripoli.

The meeting discussed measures that can be taken so that Libyan airports can receive international airlines in terms of providing a security and logistical environment at the airports, the Ministry said on its official Facebook page.

0 0
Previous : Egypt and Italy stress need for foreign forces to leave Libya without delay
Next : 1996 new cases and 28 deaths of COVID-19 recorded in Libya today