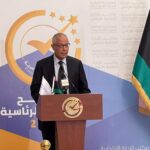 Libya’s former prime minister Ali Zeidan announced today that he will run for president in the elections on December after he submitted his candidacy papers at the High National Election Commission (HNEC) office in Tripoli.

The 70-year-old has served as the country’s leader from November 2012 until March 2014. He was infamously abducted by armed groups in 2013 as part of a coup d’état attempt by members of the General National Congress to overthrow him.

According to the latest HNEC data, 10 candidates has so far officially made a bid for the presidency, including Saif al-Islam Muammar Gaddafi and Khalifa Haftar.

The deadline for presidential candidacy filing is November 22nd. After that, the HNEC will vet all the applicants and present a final list of those allowed to compete in the first round of the presidential race.