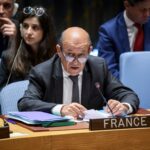 French Foreign Minister Jean-Yves Le Drian, U.S. ambassador to the U.N. Linda Thomas-Greenfield, and her Russian counterpart Dmitry Polyanskiy stressed upon the necessity to hold the Libyan general elections on December 24, during a Security Council meeting on Libya today.

“Some still oppose the timetable for the road map in Libya and the elections,” said Le Drian, who chairs the Security Council’s meeting.

“We must backtrack December 24, and work to overcome the challenges facing the Libyan people,” he added.

Similarly, Thomas-Greenfield stated that “these elections should not be postponed, and the process should be owned by the Libyans without any foreign interference or influence”.

For his part, Polyanskiy also underscored the need to hold the Libyan elections on time, while also calling on all foreign forces and mercenaries to leave Libya to ensure stability on the ground.

0 0
Previous : UN Envoy to Libya warns that election delay would result in “violence and chaos”
Next : Dbeibeh: Presence of foreign fighters in Libya poses threat to peace process