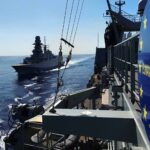 Germany has confirmed its continuing participation in the EU-led Operation IRINI in the Mediterranean, saying that it had extended the mandate until the end of April 2023, while the approval of the decision is still linked to the Bundestag parliament.

The German government indicated that its goal is to continue to provide stability to Libya and accelerate its reconstruction, as the Operation IRINI contributes significantly to these efforts and has played an active role in the UN-led peace process in the country.

“The unstable situation in Libya makes the electoral process necessary so that Libya has a chance to achieve peace and stability”, the German government added, stressing the need to stop the repeated violations of the UN arms embargo.