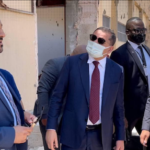 Visit of Abdel Hamid Dbeibah, Prime Minister of the Government of National Unity (GNU), to Sebha in the Southern region (Fezzan) disappointed the residents, who were waiting for the opportunity to talk to the Prime Minister and tell him about their suffering, said the Director of the Media Office of Sebha Municipality, Salah Ibrahim.

The Prime Minister’s visit was limited to passing through al-Shaab Hall building located on the road between the airport and Sebha University, where he held a meeting with juridical personalities and elites and visited the Abdel Kafi neighborhood and then left, Ibrahim explained.

The residents expected the visit would include checking roads and neighborhoods, as happened during the Prime Minister’s tour in Tripoli, and that he would give the municipality and its surroundings a greater opportunity, but the high security and limited time were factors that disappointed the residents, he added.