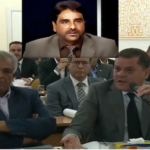 GNU responses were not convincing, confidence might be withdrawn, Libyan MP says

The Government of National Unity (GNU) responses in Wednesday’s questioning session were general and not convincing on core issues such as spending and tasks assigned to the Government according to the Geneva Agreement, said Member of the Libyan House of Representatives (HoR), Abdul Salam Nassiya.

“HoR will hold a session next Monday to evaluate GNU’s responses, through which it may be agreed to hold a session to withdraw confidence from the Government,” Nassiya added.

It is noteworthy that HoR held a session on Wednesday in Tobruk for questioning GNU, headed by Abdel Hamid Dbeibeh.