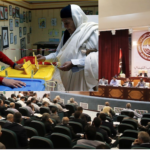 The Libyan House of Representatives (HoR) referred to the Head of the UN Support Mission in Libya (UNSMIL), Jan Kubis, a copy of Law No. (1) of 2021 regarding electing the President of State and determining his/her duties, powers and conditions for candidacy.

In chapter 4 of the law, which was titled (Right to Candidacy and its Procedures), several articles were mentioned.

Article 9 stipulates that “the President of the State shall be elected by direct general secret ballot from the voters who are registered in the voter database, and each voter must exercise this right himself/herself.

In Article 10, 11 conditions were specified for the person who will apply for the position of President of State, as follows:

1- He/she must be a Libyan Muslim of Libyan Muslim parents.
2. He/she shall not hold the nationality of another country upon his/her candidacy.
3. He/she should not be married to a non-Libyan.
4. His age shall not be less than forty Gregorian years on the day of opening the candidacy door.
5. To have at least a university degree or its equivalent from an accredited university.
6- He/she shall enjoy his civil rights.
7- He/she should not have been convicted of a felony or a crime against honor or trust.
8- He must be healthy enough to carry out the duties of the presidency.
9- To submit a declaration of his immovable and movable property for him/her, his wife/her husband and his/her minor children inside and outside Libya.
10- He/she should not be an employee of the High National Elections Commission (HNEC) or its electoral committees, or a member of one of the polling center committees.
11- Any other conditions stipulated by law.

Article 11 of the law states, “To accept candidacy for the presidency, the candidate must submit a recommendation from a number of no less than 5,000 voters who are registered in the voter database.”

In Article 12, it is stated that: “Every citizen, whether civilian or military, shall be considered suspended from work and exercise of his duties three months before the date of the elections. If he/she is not elected, he/she shall return to his previous work and all his dues shall be paid to him/her.

0 0
Previous : GNU responses were not convincing, confidence might be withdrawn, Libyan MP says
Next : Libya records 1,802 new cases and 23 deaths of COVID-19