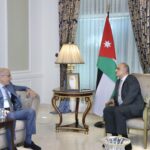 Global economic challenges and its repercussions on the Arab countries are the most prominent themes of talks between Saddek Elkaber, Governor of the Central Bank of Libya, and Jordanian Prime Minister Bisher Al-Khasawneh, during their meeting in Amman yesterday.

According to a brief statement by the Libyan central bank, Al-Khasawneh “praised the pivotal role played by the Central Bank of Libya towards stabilizing the economic and financial situation in Libya.”

The Libyan bank reported in another statement that Elkaber also met on the same day with his Jordanian counterpart Adel Ahmed Al-Sharkas to discuss “ways to enhance aspects of cooperation between the two central banks”.