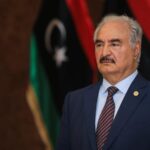 Haftar back as general commander of LNA

Khalifa Haftar returned to his post as general commander of the Libyan National Army (LNA), a source told The Libya Update.

Haftar stepped down from LNA leadership in September last year in order to run for president.

However, the presidential elections, which were originally set for December last year, failed to take place due to dispute over electoral laws.

0 0
Previous : New Libyan ambassadors perform oath before Al-Menfi
Next : UN spokesman: No substitute for UN envoy to Libya has been proposed so far