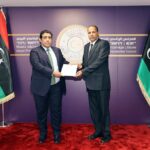 New Libyan ambassadors appointed to work in the UK, Iraq and Gambia took the legal oath before the chairman of the Presidential Council Mohamed al-Menfi.

Al-Menfi told the new ambassador that they “should contribute to strengthening relations with the countries they are delegated to”,” according to the statement.