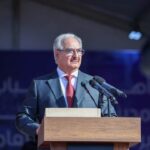 Member of the House of Representatives, Hassan Al-Zarqa, confirmed that the commander of the Libyan National Army, Field Marshal Khalifa Haftar, “spoke on behalf of the entire Libyan street, especially in Cyrenaica and Fezzan, regarding the fairness of the distribution of oil revenues.”

“While most of the oil is extracted from the east and south, the revenues are in favor of the cities of the west, especially Tripoli, Misrata and Zawiya, which are the cities that receive the largest share of investments and urban projects, Al-Zarqa said in press statements.

“This causes discontent with the rest of the Libyan cities, especially Benghazi, Al-Bayda, Ajdabiya and Tobruk,” Al-Zarqa added.