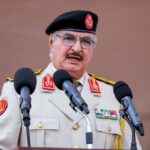 Haftar: Libya’s army will always be the biggest obstacle against terrorists

Field Marshal Khalifa Haftar, the General Commander of the Libyan National Army (LNA), initiated on Monday a ceremony in Benghazi’s Benina Air Base to commemorate the 81 anniversary of the country’s national army.

In a speech addressing the soldiers in the ceremony, Haftar emphasized “the Libyan army has never been a tool of oppression or prejudice against the people, nor will it ever be aggressive or biased towards any Libyan tribe”.

He also underlined that the Libyan army “will always be the biggest obstacle that prevents terrorists from imposing their version of Islam against us”.

He also stressed that the army is committed to confronting “the waves of terrorists who stormed Libya, who raised slogans of death by slaughtering and beheading.”

The Libyan commander considered that the Libyan army “is the main pillar upon which the people depend their future”.

Haftar also pointed out to the role of the army in shaping the ongoing peace process, as it insisted on elections and formation of a joint military committee as means by which the political and security issues in the country can be resolved.

“The army has played a role in preparing the country for the road map, and without it, the elections would not have a place on the map, nor would have the joint military committee been formed”.

The LNA General Commander concluded his speech by welcoming “whomever seeks reconciliation”.