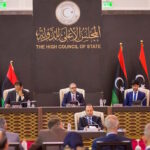 The High Council of State (HCS) confirmed that the constitutional amendment No.12 issued by the House of Representatives, as well as the change of the prime minister, are not final decisions, noting that there are many notes on them.

HCS said in a statement that its decision regarding the constitutional amendment No.12 and changing the prime minister will be during an official session, with full transparency.

The Council affirmed its keenness “for the safety of homeland, its unity, and the sanctity of Libyan blood, far from any political gains and narrow interests that some might think of.

In its statement, the Council affirmed its “deep commitment to the goals and principles of the revolution and preservation of the blood and sacrifices that paved the way for the revolution,” congratulating the Libyans on the eleventh anniversary of the February 17 revolution.