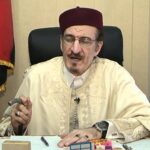 Saleh Jaouda, a member of Libya’s High Council of State (HCS), has criticized the attempts of the House of Representative to form a new interim government; something which he views as a threat to the country’s future.

In a statement via his Facebook page, Jaouda called out House Speaker Aguila Saleh and accused him of “sedition” and “tampering with the future of our country.”

He claimed that only a new elected parliament has the right to form a new government.

Tags:High Council of StateHouse of RepresentativeLibya