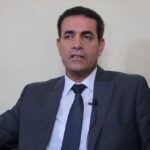 The High Council of State (HCS) has attempted to blackmail Imad al-Sayeh, the chairman of the High National Election Commission (HNEC), by threatening to push him out of office if he doesn’t agree to postpone the general elections scheduled for December 24, a former Libyan minister alleged on Wednesday.

Naji Barakat, who served as health minister in the post-Gaddafi National Transitional Council (NTC), accused the HCS of launching a “campaign” to pressure al-Sayeh to leave his post if he doesn’t approve delay of the elections.

“When he did not respond to these pressures, malicious campaigns were launched against him, whether on the pretext of falsifying voter numbers or other things,” Barakat said during a televised interview.

“The Commission currently has a system in place to prevent any voter fraud, and anyone can call the Commission’s numbers, and make sure that his or her name is registered,” he added.

“HNEC does not stand against or with any particular party, and it cannot enact laws and legislation without being promulgated and approved by the House of Representatives,” he added.