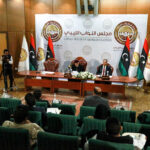 “I rule out the presence of the UN envoy, Abdoulaye Batili, in the upcoming meeting between the members of the two councils in the city of Sirte,” Al-Sharif said in a press statement today.

He indicated that the meeting will focus on the issues of executive authority, sovereign positions, and the constitutional path.

0 0
Previous : Over 200 migrants deported to home countries from Libya
Next : Future is terrifying unless Libyans take the initiative, a presidential candidate warns