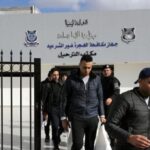 Over 200 migrants deported to home countries from Libya

The Libyan Anti-illegal Migration Department deported Thursday more than 200 undocumented migrants to their countries of origin.

The migrants, who are from Egypt, Niger and Sudan, were deported by land to their own countries, according to Nasser al-Khatroushi, head of the Deportation Office of the Anti-illegal Migration Department.

The deportation was done for the first time in collaboration with the Anti-illegal Immigration Departments of Eastern and Southern Libya.

“Today, we are very happy to see officers from Western, Eastern and Southern Libya gathered here in Tripoli to solve the issue of illegal immigration, which is a complicated issue,” said Mohamed al-Khoja, head of the Anti-illegal Immigration Department.

Libya has become a preferred point of departure for undocumented immigrants who attempt to cross the Mediterranean Sea to reach European shores.

According to the International Organization for Migration (IOM), 20,842 undocumented migrants, including women and children, have been rescued at sea and returned to Libya so far this year.

In the meantime, 500 migrants have died and 863 others gone missing off the Libyan coast on the Central Mediterranean route.