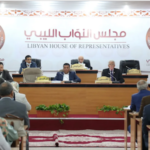 The Libyan House of Representatives (HoR) approved an article of elections law regarding the candidacy of civil and military staff for the presidential elections.

HoR article stipulated that “civilians or military staff running for the position of president of state should be suspended from work three months before the elections, and he or she has the right to return to previous position in the event of losing the elections and should also their dues for the three months. ”

HoR First Vice-President, Fawzi Nuwairi, commented on the article, describing it as a consensual formula, adding that the elected president would represent the legitimacy of the ballot box, which was accepted by the Libyans.