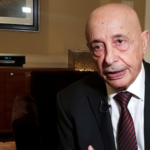 Aguila Saleh, Speaker of the Libyan House of Representatives (HoR), said that the Government of National Unity (GNU) had failed to unify Libya’s institutions and had become a “Tripoli government”, demanding it to take care of the obligations of the two dissolved governments.

He said he did not want to see further divide, warning that a new, parallel government could emerge in the east.

The aim of GNU was to ensure public services and lead the country to general elections on December 24, he added.

“If the elections are delayed, we will go back to square one,” Saleh told Reuters at his office in the eastern town of Qubba.