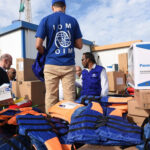 Around 224,000 people are still internally displaced and in need of continued humanitarian aid, the International Organization for Migration (IOM) said on Monday.

On the other hand, the IOM pointed out that the number of returnees identified during the reporting period increased to 642,408 individuals, compared to 623,219 returnees reported in the previous round’s report.

While Libya’s latest ceasefire is in place, around 224,000 people are still internally displaced, some in need of continued humanitarian aid.

A significant number of Libyan IDPs facing protracted displacement due to damaged houses and infrastructure.

0 0
Previous : HoR session suspended until Tuesday without approving govt budget
Next : Oil minister tells British ambassador that his ministry must not be overridden