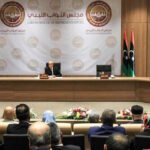 The Libyan House of Representatives suspended its session, which was held today, in Tobruk, until Tuesday, without approving the budget proposed by the Government of National Unity, which was estimated at 93 billion Libyan dinars, about USD 21 billion.

According to Libya Update sources, the members of the House of Representatives were scheduled to discuss a law to elect a president directly from the people in December. However, disagreements over approving the government’s budget are still ongoing, since Prime Minister Abdel Hamid Dbeibeh presented the budget last month.