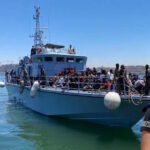 IOM, UNHCR: Rescued migrants should not be returned to Libya

Date: Thursday, June 17, 2021
74 Views
GENEVA – The International Organization for Migration (IOM) and UNHCR, the UN Refugee Agency, reiterated that migrants and refugees should not be returned to Libya after being rescued at sea.

IOM and UNHCR confirmed in a joint statement Wednesday that over 270 migrants and refugees were handed over to the Libyan Coast Guard by the ship “Vos Triton”, sailing under the flag of Gibraltar.

“Vos Triton” had rescued the group in international waters during their attempt to reach Europe on 14 June. On 15 June, the Libyan Coast Guard returned them to the main port of Tripoli, from where they were taken into detention by the Libyan authorities, according to the statement.

IOM and UNHCR called on States to coordinate so that merchant vessels rescuing people in distress are granted swift permission for disembarkation in a place of safety, to avoid lives being placed at risk.