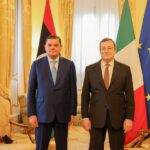 Italy to kick off Libya talks on Sunday to “save” December elections, report

Italy will host, starting next Sunday, a series of talks that may be decisive in “saving” the Libyan elections scheduled for December 24, reported Italian news agency Nova.

Citing Libyan sources, the agency also said that the meetings of the new parliamentary special committee will take place in the Rome, next Sunday, following the end of the Eid al-Adha holiday.

The special committee was formed by the House of Representatives to draft an electoral law.

A number of influential Libyan figures will reportedly attend these talks including the Speaker of House, Aguila Saleh, and the Chairman the High National Elections Commission (HNEC), Imad al-Sayeh.