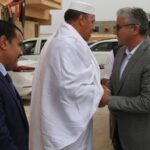 Mohamed Al-Kani, one of the leaders of Libyan armed group known as Al-Kanyat, was killed in Benghazi on Tuesday, after resisting his arrest by authorities during a raid on his residence, according to press reports.

Two arrest warrants were issued against Al-Kani by both the civil and military judiciary, over allegations of war crimes attributed to him, which he allegedly committed during his affiliation with the former Government of National Accord (GNA).

One of Al-Kani’s companions was also killed, while a number of his associates were arrested in separate areas of Benghazi, Ajdabiya and Tobruk.