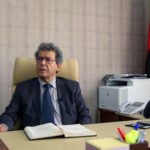 Aoun attributed the reason for the increase in production to the maintenance of the crude oil transmission line from the Samah field to Al Sidra port, which added to the general production 200,000 barrels per day, which Libya lost more than a week ago.

The minister added that the El Sharara field is still suspended, which means the continued loss of 300,000 barrels of oil per day due to the closure of the Hamada valve by some gunmen affiliated with the Petroleum Facilities Guard, in addition to the loss of 100,000 barrels per day from the production of Mellitah Company for the same reason.