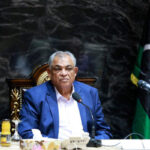 Libyan Deputy Prime Minister Hussein al-Qatrani said that Prime Minister Abdel Hamid Dbeibeh thwarted the elections by running for office despite his pledge not to run.

Al-Qatrani added, in televised statements, that Dbeibeh issues decisions unilaterally, adding that there must be competencies for the deputy prime minister.

The Deputy Prime Minister continued, “I demanded UN mission of providing observers to follow up on the government’s work.”

He emphasized, “We reject the interference of Dbeibeh’s family in the government’s decisions, stating that Dbeibeh practiced political and electoral propaganda exploiting Libyans’ money.

He pointed out that the elections should enjoy an appropriate atmosphere, saying: “If the elections are held within two years, we will be lucky.”

0 0
Previous : Dbeibeh and his deputy to meet after dispute
Next : Libya oil production rise to 900,000 barrels per day, says oil minister