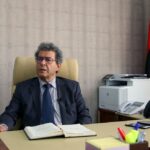 The Libyan Minister of Oil and Gas, Mohamed Oun, expressed his hope that by the end of this year, Libya’s oil production would reach between 1.4 and 1.5 million barrels per day.

In a TV interview, the Minister of Oil said that Libya’s production is currently 1.3 million barrels per day, and this includes the share of the Non-Libyan partner and investor. He noted that the cost of producing a barrel of oil ranges between 8 and 10 dollars, and that the country consumes 150,000 barrels per day. The Libyan state subsidizes fuel locally by about 23 billion dinars, nearly 5 billion US dollars, he added.

The minister pointed out that “Libya’s oil reserves amount to 48 billion barrels, which is an old number and has not been updated, and about half of this number was produced.”

“I expect that the country’s reserves are more than that, and for gas, the reserves amount to 52 trillion cubic feet of natural gas, and even this number I expect to rise to 80 trillion,” the minister noted.

Regarding the oil sector losses due to wars, Minister Aoun indicated that it is difficult to determine them. “Suspending production is not considered a loss, but rather a postponement of production so that the country can extract oil and export it at a later time.” He explained.

He pointed out that several oil fields were completely destroyed, such as the Mabruk field, Zella, Al-Sabah, Al-Fadda, Al-Hakim, Al-Ghani and Al-Zind fields.

0 0
Previous : Plan by some LPDF members to obstruct elections through constitutional referendum
Next : Saleh assures his Greek counterpart of the need to remove foreign forces from Libya