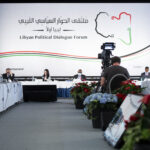 Plan by some LPDF members to obstruct elections through constitutional referendum

GENEVA – Some members of the Libyan Political Dialogue Forum (LPDF) plan to obstruct the presidential and parliamentary elections in December 24 by forcing a constitutional referendum instead.

According to sources from the LPDF, the plan requires implementation of the referendum by the parliament Law 6/2018, which requires that the draft constitution obtain 51% of the votes of citizens in each Libyan region (Tripoli, Cyrenaica, Fezzan).

The draft law will be considered invalid if one of the regions votes No.

Plan by the group hinges on the draft constitution being rejected by one of the regions. This would derail the constitutional process and elections, and force a new round of dialogue which would guarantees survival of the Government of National Unity (GNU) and councils for the next 2 years