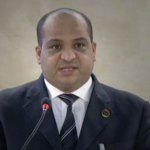 “The evidence for the failure of the meeting is in the words of Minister Najla Al-Manqoush herself,” al-Saghir stated via Facebook. “a press conference in which there is no final statement, not even mention of the topics that were discussed, not even an agenda to consult about,” he added.

“All of this explicitly says that there was no meeting, no topics, and no issues that were discussed, only a failed gathering and a press conference about the reasons for its failure.”

Ahead of Sunday’s meeting, authorities in the Libyan capital granted a day off for civil servants and closed off major roads around the Mitiga airport, the only functional airport in the capital, and a luxury hotel where the gathering took place.