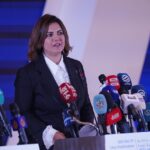 The withdrawl of foreign forces from Libya before the upcoming elections on December 24 is “not possible”, the country’s foreign minister said on Friday.

Najla Mangoush said the newly elected government will instead handle this issue.

“There are efforts to withdraw mercenaries and foreign forces from Libya gradually during the current period, but insisting that all of them leave before the elections is not possible,” she told Al-Arabiya channel last night.

She also expressed concern that persistence on removing foreign forces before December 24 could be misinterpreted as an attempt to obstruct the elections.

“We support a simultaneous and gradual withdrawal, even by 15 percent or 20 percent, before the elections, which would enable citizens to trust the electoral process, and makes them feel that there is a real effort in this issue” the chief diplomat said.

“The new elected government may be able to complete finalize this issue at certain levels,” she said.