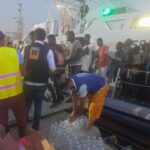 Libyan Navy: 201 immigrants rescued in the Mediterranean on a rubber boat

The Libyan Naval Forces announced that it had rescued 201 immigrants of African nationalities in the Mediterranean, who were on their way to European shores on a rubber boat.

“The rescue operation comes within the framework of humanitarian efforts and sovereign tasks to protect the Libyan coast, providing search and rescue services in the Libyan area of ​​responsibility, and saving the lives of illegal immigrants across the sea,”
A spokesman for the Naval Staff’s Chief of Staff said in a statement today.

According to the statement, the Ubari boat was moved “as soon as it received a distress call, after it was equipped with the necessary capabilities for the rescue and recovery operation.” “After the rescue operation was completed, the immigrants were disembarked at the Tripoli Naval Base landing point, and all of them were transferred to the Anti-Illegal Immigration Authority in Tripoli.”

0 0
Previous : New Chargé d’Affairs at Libyan Embassy in Cairo takes over
Next : Guterres warns of “deteriorating” humanitarian situation in Libya