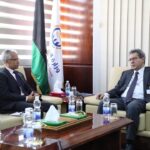 Oil Minister of Libya’s Government of National Unity, Mohamed Aoun, held talks on Friday with the French Ambassador in Libya, Mustafa Maharaj, and his accompanying delegation.

During the meeting, the minister discussed the development of the oil and gas sector, while “underlining the importance of involving international companies,” according to a statement from the Libyan Oil Ministry.

For his part, the French diplomat stated via Twitter that he discussed with Aoun the prospects for French-Libyan cooperation, “particularly in vocational training and renewable energies”.

0 0
Previous : Saleh receives SC members in Qubba to agree on the unification of the executive authority
Next : UN brings together Libyan female activists for campaign to end gender violence