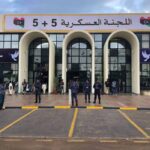 A number of Libyan political parties have released a joint statement, in which they expressed their support for the 5+5 Joint Military Committee and its demand to freeze all military deals with foreign countries.

“[We] commend the patriotic positions of the 5+5 Joint Military Committee, and appreciate its role in maintaining the ceasefire agreement and opening the coastal road,” reads the statement.

“We support what was issued by [the committee] at its meeting in Sirte on Saturday, August 14, to freeze all foreign military agreements in all parts of Libya, especially with Turkey and Russia,” said the Libyan parties.

They also called on the committee to take the necessary measures to complete the withdrawal of mercenaries and all foreign military forces.

The Libyan parties also called for disarming the country’s militias armed groups and for unifying the military institution.