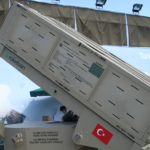 Turkey deployed on Tuesday a multiple launch rocket system in Tripoli, reportedly in support of the Government of National Unity.

The T-122 Sakarya MRL launcher was seen entering a military camp in Janzour, west of the Libyan capita, at noon today.

The multiple launch rocket system developed by the Turkish weapons manufacturer Roketsan, which is based in Ankara. It has 40 barrels and a maximum firing range of 40 km. It is used for indirect fire support against aerial targets, air defense systems, command centers and supply lines.

Press reports documented the usage of T-122 Sakarya MRL in the Syrian Civil War and the 2020 Nagorno-Karabakh war.