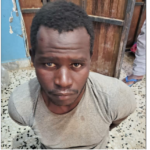 Al-Mismari explained that “the terrorist is called Adam Ibrahim Ahmed, a Sudanese national, pointing out that he fell into an ambush by LNA forces near the Qatrun town in the far Southwest, where a number of other terrorists managed to escape towards the Chadian border.”

“Based on the information provided by the captured terrorist, he was working under the command of a Saudi terrorist Emir inside the Libyan territory,” LNA Spokesman added.

Al-Mismari confirmed “the continuation of the pursuit of terrorists and outlaws, according to the plan approved by LNA General Command Operations Room.”