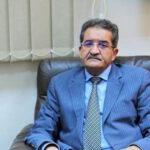 Abdul Rahman al-Abbar, former Attorney General and member of the Libyan Political Dialogue Forum (LPDF), expressed his astonishment at the UN Support Mission in Libya (UNSMIL) giving LPDF the right to amend the roadmap that the Forum itself approved.

“When I inquired about the Mission’s role in enforcing respect for the road map reinforced by Security Council resolutions and Berlin Conferences I and II outcomes, and thus adherence to the constitutional base proposals, including what was stated in it, the Mission’s General Coordinator answered me: “This falls within the competence of LPDF.” I do not know how this is done in light of the existing differences in the Forum,” al-Abbar tweeted.

“The General Coordinator has fallen into a contradiction when he gave the right to LPDF to amend the road map based on the fact that it was made by the Forum itself, and at the same time he said, “except for what would undermine the goal of the map.” This means that there are issues that are within the competence of the Forum, and there are issues that are not within its competence,” al-Abbar added.