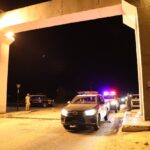 A number of Libyan joint military forces headed to Sirte on Wednesday to take part in securing today’s meetings of the 5+5 Joint Military Committee.

Units of the Criminal Investigation Agency in Benghazi, as well as its units in Ajdabiya, Al-Wahat, and Ras Lanuf would join Sirte-based military forces to ensure safety of the committee’s members.

The 5+5 Joint Military Committee is expected to announce new steps regarding the opening and securing of the coastal road linking the western and eastern parts of the country.

0 0
Previous : 3161 people test positive for Coronavirus, 31 others dead in Libya
Next : Over 2.5 million voters register for December elections, says HNEC