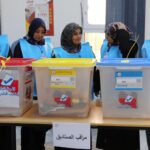 More than 2.5 million eligible voters have registered to take part in the general elections on December 24, said the High National Election Commission (HNEC) on Wednesday.

The registration rate reached 52.91 percent of the total number of Libyan citizens legally allowed to vote, according to the HNEC.