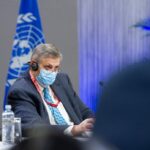 The co-chairs of Libya’s Economic Working Group discussed with Prime Minister Abdul Hamid Dbeibeh, as well as representatives of the parliament and central bank, the budget impasse and explore options to address the country’s pressing needs, according to a statement by the U.N. Mission in Libya (UNSMIL) on Tuesday.

“The EWG Co-Chairs encouraged the Government of National Unity, the House of Representatives, and other Libyan actors to find realistic compromise solutions and lay the groundwork for measures to advance the unification of the country and provide services to the Libyan people,” UNSMIL said.

“The Co-Chairs noted that making progress on the budget can serve as a significant step toward additional political compromise and consensus that is urgently needed at this stage of the political process,” it said.  “They reiterated the support of the international community to help advance these efforts.”

Statement on the meeting of the Economic Working Group of the International Follow-Up Committee 👉https://t.co/H0BnW8rfqG pic.twitter.com/E6KExoSOPK