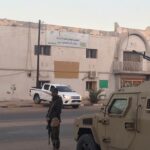 LNA says security under control in Sabha after court attack

Forces of the Libyan National Army (LNA) has secured the security situation in Sabha is under control following an attack on the city’s court of appeal by unknown armed group on Thursday.

The armed attacked reportedly happened as a lawyer for Saif al-Islam Gaddafi arrived in the court to appeal the decision of the High National Election Commission (HNEC) to disqualify him from running for president. No casualties were reported.

The United Nations condemned the attack saying that “attacks against judicial or election facilities or judicial or elections personnel as are not only criminal acts, punishable under Libyan law, but also undermine Libyans’ right to participate in the political process”.

The LNA told The Libya Update that its forces have intensified their presence in the southern city, particularly around the HNEC branch office and the court of appeal, in order to “prevent any further security breaches.”

0 0
Previous : Libya Military Committee to meet in Turkey and Russia next month
Next : Libya’s HNEC leader hints at elections delay