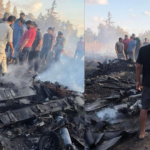 Forces of the Libyan National Army (LNA) on Monday shot down an unmanned drone near near Benghazi via a man-portable surface-to-air missile system (MANPAD), according to LNA’s media office.

“The air defense media of the General Command targeted an unidentified filming drone that entered the skies of Benghazi near Al-Rajma and the Benina base and brought it down,” LNA said.

LNA, which has territorial control over eastern and southern Libya, confirmed that the drone entered Benghazi’s skies without authorization.

Subsequent footage released shows what appears to be the drone burning and slowly falling to the ground after being hit by a surface-to-air missile.