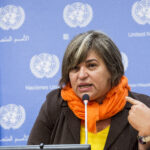 Member of the Libyan Political Dialogue Forum (LPDF), Amal Bugaigis, said she “hopes that the 5+5 Joint Military Committee (JMC) will expand and become a unified military and security council, moving the country towards peace.”

Bugaigis described the meeting of commanders from the Libyan National Army (LNA) and Misurata forces in the Shuwairif town as a “positive step,” calling for this to be used in forming a unified military security council, which would undertake the tasks of the Supreme Commander of the Libyan Armed Forces.

It is noteworthy that Colonel Omar al-Jadid, Commander of Tariq bin Ziyad Brigade of the Libyan National Army (LNA), had met with the Commander of 166 Battalion for Protection and Security from Misrata, Mohammed al-Hussan, for the creation of a new joint force to secure the Great Man-Made River (MMR).

0 0
Previous : 31 LPDF members call on UN envoy to hold emergency session for the Dialogue Forum
Next : UNHCR: 130 migrants returned to Libya, 4 others missing