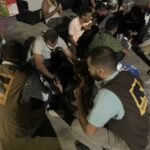 At least 130 migrants were rescued and brought back to Tripoli on Friday evening after their two boats capsized at sea, the U.N. Refugee Agency (UNHCR) announced on early Saturday morning.

Four others were reported on missing, UNHCR said.

Most of the rescued migrants suffered from “burns, dehydration and severe fatigue,” according to the U.N. agency.

🚨 Some 130 persons were rescued from 2 boats that capsized at sea and were returned this evening to Tripoli.
4 persons were reported missing.
‌
UNHCR & IRC provided medical assistance, food & water to all survivors.
Most of them suffered from burns, dehydration & severe fatigue. pic.twitter.com/IP12SpIxj7