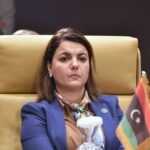 Mangoush could resign over feud with Dbeibeh’s cousin, report

Libya’s Foreign Minister Najla Mangoush has not returned to Libya to resume her duties for nearly a month due to a dispute between her and Ibrahim Dbeibeh, an advisor and cousin to Prime Minister Abdul Hamid Dbeibeh, a Libyan press reports.

Citing unnamed sources in the foreign ministry, El-Enwan newspaper said the feud between Mangoush and Dbeibeh is over appointing new staff at the country’s diplomatic missions abroad.

According to El-Enwan, Mangoush is currently at the Shangri-La Bosphorus Hotel in Istanbul where she is allegedly “contemplating jumping off the Dbeibeh family’s boat and handing her resignation”.

0 0
Previous : US returns looted antiquity to Libya
Next : ECRE: 32,000 people intercepted and returned to Libya in 2021