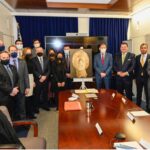 US returns looted antiquity to Libya

American prosecutors and law enforcement officers have announced they are to return an ancient antiquity to Libya after investigators concluded that smugglers had stolen the marble artefact from its country of origin.

“It is with great pleasure that we are returning the Veiled Head of a Female back to the nation of Libya, from where it was looted during civil unrest,” Erik Rosenblatt, deputy special agent in charge at Homeland Security Investigations in New York, said in a statement.

“Though this antiquity has a monetary value of more than $1.2 million, it is the historical and sentimental value of the antiquities that renders it priceless to the people of Libya.”

A long investigation last month concluded that New York billionaire Michael H Steinhardt bought the antiquity in 2000. It came from a tomb in the ancient city of Cyrene, modern day Shahhat, in north-eastern Libya.

The Libyan foreign ministry confirmed on Thursday that the country’s embassy in Washington received the looted antiquity.

0 0
Previous : MSF treats 68 migrants after mass arrest in Tripoli
Next : Mangoush could resign over feud with Dbeibeh’s cousin, report