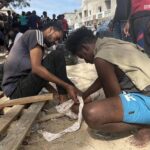 A team of Médecins Sans Frontières (MSF), also known as Doctors Without Borders,  has treated 68 people who were injured during a mass arrest two days ago in Libya, when hundreds of migrants asking for protection were taken to a detention center in Ain Zara, MSF operations manager Ellen van der Velden said.

MSF said in a statement that seven of those wounded required medical treatment in hospital, while 190 people were offered psychological support.

“More than 600 migrants, asylum seekers and refugees, peacefully demonstrating for relocation, protection, and evacuation from Libya were arrested and moved to Ain Zara detention centre in the southern part of Tripoli, where hundreds of migrants, refugees and asylum seekers are already detained in overcrowded cells and deprived living conditions,” said Gabriele Ganci, Head of MSF in Libya.

“During the weekly visit to Ain Zara to provide medical and mental health care to people detained, MSF teams have treated patients with stab wounds, beating marks, and signs of shock/trauma caused by the forced arrests. Among them there were people who had been beaten and separated from their children during the raids,” he continued, according to a statement posted online by MSF.

0 0
Previous : Libyan lawmakers demand investigation against Dbeibeh over corruption
Next : US returns looted antiquity to Libya